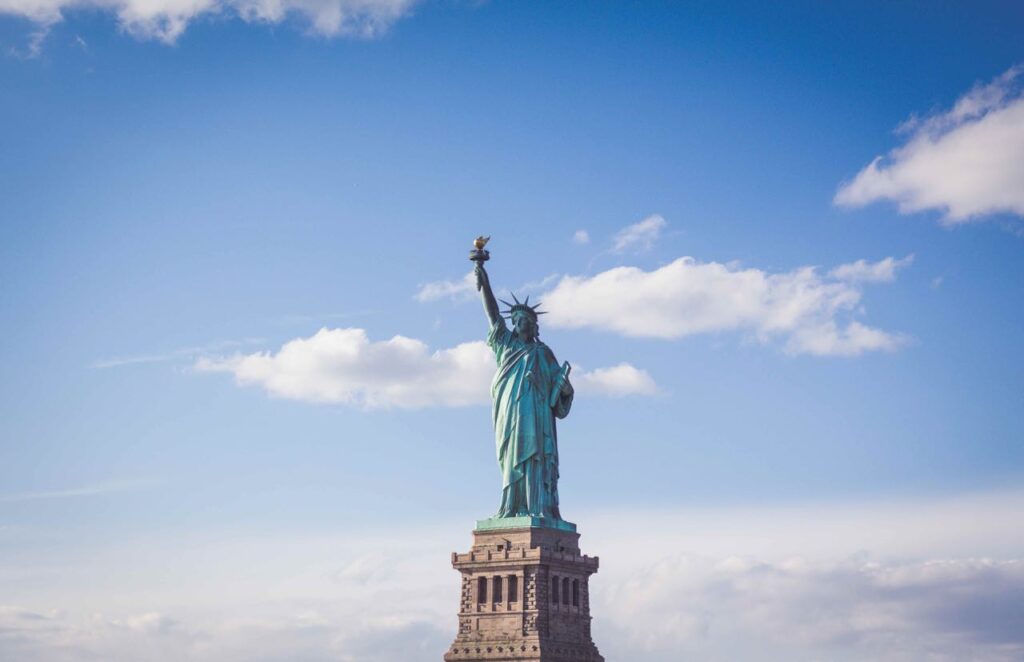 This living book list includes recommendations for elementary and middle school students. Use parent discretion. Some books contain sensitive content and are not appropriate for all ages. Some books are vintage with original language, including terms that are not respectful or appropriate today. Reading vintage living books aloud with your student creates an opportunity to engage in important dialogue about historical misconceptions/wrongs and the importance of word choice to show respect to all people. Four Square condemns any words used to describe people or people groups that undermine their value as created in the image of God.

Benjamin West and His Cat Grimalikin, by Marguerite Henry
Cheyenne Again, by Eve Bunting
Doesn’t Fall Off His Horse, by Virginia Stroud
Full Worm Moon, by Margo Lemieux
Hiawatha, by Henry Wadsworth Longfellow
If you Lived with the Sioux Indians, by McGovern

Island of the Blue Dolphins, by Scott O’Dell
Many Nations: An Alphabet of Native America, by Joseph Bruchac
Meet Kaya: An American Girl, by Janet Beeler Shaw
Night Bird, by Kathleen Kudlinski
Northwoods Cradle Song, by Douglas Wood
Sacajawea and the Journey to the Pacific, by Gina Ingoglia
Shadow of the Wolf, by Gloria Whelan
Small Wolf, by Nathaniel Benchley
Squanto Friend of the Pilgrims, by Clyde Robert Bulla
Squanto’s Journey: The Story of the First Thanksgiving, by Joseph Bruchac

Calico Bush, by Rachel Field
Columbus, by D’Aulaire
Encounter, by Jane Yolen
Eric the Red and Leif the Lucky, by Barbara Schiller
Father Marquette and the Great Rivers, by August Derleth
Follow the Dream: The Story of Christopher Columbus, by Peter Sis
Leif the Lucky, by D’Aulaire
Marquette and Joliet: Quest for the Mississippi, by Alexander Zelenyi
Tattered Sails, by Verla Kay
The Vikings, by Elizabeth Janeway
Where Do You Think You’re Going, Christopher Columbus, by Jean Fritz
Who Was Ferdinand Magellan, by S.A. Kramer
Who Was Leif Erickson, by Nico Medina

Homespun Sarah, by Verla Kay
Johnny Tremain, by Esther Forbes
Our Colonial Year, by Cheryl Harness
The Courage of Sarah Noble, by Alice Dagliesh
The Story of the Pilgrims, by Katherine Ross and Carolyn Croll

Arrow over the Door, by Joseph Bruchac
Ben and Me, by Robert Lawson
Benjamin Franklin, by D’Aulaire
Betsy Ross, by Alexandra Wallner
Boston Coffee Party, by Doreen Rappoport
Boston Tea Party, by Pamela Duncan Edwards
Did It All Start with a Snowball Fight and Other Questions, by Mary Kay Carson
George the Drummer Boy, by Nathaniel Benchley
George Washington, by D’Aulaire
George vs George: The American Revolution As Seen from Both Sides, by Rosalyn Schanzer
Guns for General Washington, by Seymour Reit
Hatmaker’s Sign, by Flemming
Let it Begin Here! Lexington and Concord, by Dennis Brindell Fradin
Mr. Revere and I, by Lason
Paul Revere’s Ride, by Henry Wadsworth Longfellow
Phoebe the Spy, by Judith Griffin
Sam the Minuteman, by Sally M. Walker and Nathaniel Benchley
Sybil’s Night Ride, by Karen Winnick
The Cabin Faced West, by Jean Fritz
The Fourth of July Story, by Alice Dagliesh
The 18 Penny Goose, by Sally M. Walker and Nathaniel Benchley
Toliver’s Secret, by Esther Brady
When Washington Crossed the Delaware, by Lynne Cheney

The Constitution & Bill of Rights

A Picture Book of Sacagawea, by David A. Adler
A Pioneer Sampler: The Daily Life of a Pioneer Family, by Barbara Greenwood
Apples to Oregon, by Deborah Hopkinson
Bound for Oregon, by Jean Van Leeuwen
Boss of the Plains, by Laurie Carlson
Buffalo Bill, by D’Aulaire
By the Great Horn Spoon, by Sid Fleischman
Caddie Woodlawn, by Carol Ryrie Brink
Children of the Covered Wagon, by Mary Jane Carr
Cowboys and Cowgirls, by Gail Gibbons
Daily Life in a Covered Wagon, by Paul Erickson
Dandelions, by Eve Bunting
Daniel Boone, by Stevenson

Farmer Boy, by Laura Ingalls Wilder
Gold Fever, by Rosalyn Schanzer
Gold Fever, by Verla Kay
Gold Rush Fever: A Story of the Klondike 1898, by Barbara Greenwood
Hattie Big Sky, by Kirby Larson
Hard Gold, by Avi
How We Crossed the West: The Adventures of Lewis and Clark, by Rosalyn Schanzer
If You Traveled West in a Covered Wagon, by Ellen Levine
Land of the Buffalo Bones, by Marion Bauer

Little House in the Big Woods, by Laura Ingalls Wilder

Little House on the Prairie, by Laura Ingalls Wilder
Lewis and Clark and Me: A Dog’s Tale, by Laurie Myers
Moccasin Trail, by Eloise Jarvis McGraw
Mr. Tucket, by Gary Paulsen
On to Oregon, by Honore Morrow
Our Only May Amelia, by Jennifer Holm
Rachel’s Journal: The Story of a Pioneer Girl, by Marissa Moss

Prairie Lotus, by Linda Sue Park
Sacagawea, by Flora Warren Seymour
Seaman’s Journal: On the Trail with Lewis and Clark, by Patricia Eubank
Shag: Last of the Plains Buffalo, by Robert McClung
Streams to the River, River to the Sea, by Scott O’Dell
The Ballad of Lucy Whipple, by Karen Cushman
The Girl Who Loved Wild Horses, by Paul Goble
The Land of Little Rain, by Mary Austin
The Legend of the Bluebonnet, by Tomie dePaola
The Stouthearted Seven: Orphaned on the Oregon Trail, by Neta Lohnes
Who Was Daniel Boone, by Sydelle Kramer

The Poems of Phillis Wheatley, by Phillis Wheatley
The Perilous Road, by William O. Steele
The Silent Witness, by Robin Friedman
The War Within, by Carol Matas
Turn Homeward, Hannalee, by Patricia Beatty
Underground to Canada, by Barbara Smucker

Up From Slavery, by Booker T. Washington
Walking the Road to Freedom, by Jeri Ferris

Bobbin Girl, by Emily McCully
Danger at the Breaker, by Catherine Welch
Eli Whitney and the Cotton Gin, by Jessica Gunderson
Florence Robinson: The Story of a Jazz Age Girl, by Dorothy and Thomas Hobier
Good-Bye, Charles Lindbergh: Based on a True Story, by Louise Bo
Henry Ford: Young Man With Ideas, by Hazel B. Aird
I am Neil Armstrong, by Brad Meltzer
If I Only Had a Horn: Young Louis Armstrong, by Roxane Orgill
Imagine You Were There… Walking on the Moon, by Caryn Jenner
Full of Beans: Henry Ford Grows a Car, by Peggy Thomas
Lyddie, by Katherine Paterson
Safe Return, by Catherine Dexter
Sky Boys: How They Built the Empire State Building, by Deborah Hopkinson
So Far From Home: The Diary of Mary Driscoll, by Barry Denenberg
The Blue Door, by Ann Rinaldi
The Clock, by James Lincoln Collier
The Great Brain is Back, by J.D. Fitzgerald
The Groundbreaking, Chance-Taking Life of George Washington Carver, by Cheryl Harness
The Wright Brothers: How They Invented the Airplane, by Russell Freedman
The Year of the Horseless Carriage 1801, by Genevieve Foster
Thomas Edison: Young Inventor, by Sue Guthridge
With Books and Bricks: How Booker T. Washington Built a School, by Suzanne Slade and Nicole Tadgell
Where is the Empire State Building, by Janet B. Pascal
Who Was Booker T. Washington, by James Buckley Jr.
Who Was Henry Ford, by Michael Burgan
Who Was Louis Armstrong, by Yona Zeldis McDonough
Who Was Neil Armstrong, by Roberta Edwards
Who Was Thomas Alva Edison, by Margaret Frith

A Brave Soldier, by Nicolas Debon
Archie’s War, by Archie Albright
Christmas in the Trenches, by John McCutcheon
Goodbye, Billy Radish, by Jean Little
His Banner Over Me, by Jean Little
Knit Your Bit: A World War 1 Story, by Deborah Hopkinson
Lord of the Nutcracker Men, by Iain Lawrence
Rags: Hero Dog of WWI, by Margot Theis Raven
Rascal, by Sterling North
Ruthie’s Gift, by Kimberly Bradley
Sergeant York, by John Perry
The Night the Bells Rang, by Natalie Kinsey Warnock
The War to End All Wars: World War 1, by Russell Freedman
Truce, by Jim Murphy
War Game, by Michael Foreman
When Christmas Comes Again, by Beth Seidel Levine
Where the Poppies Grow: A World War 1 Companion, by Linda Granfield

Anna’s Fight For Hope, by Joann Grote
A Year Down Yonder, by Richard Peck
Children of the Dust Bowl: The True Story of the School at Weedpatch Camp, by Jerry Stanley
Christmas After All, by Kathryn Lasky
Christmas With Ida Early, by Robert Burch
Dust for Dinner, by Ann Turner
Grandma’s General Store, by Dorothy Carter
Ida Early Comes Over the Mountain, by Robert Burch
In the Shadow of the Pines, by Karen Newell
Jar of Dreams, by Yoshiko Uchida
Leah’s Pony, by Elizabeth Friedrick
Lizzie’s Storm, by Sally Fitz-Gibbon
Long Way From Chicago, by Richard Peck
Moon Over Manifest, by Clare Vanderpool
Nothing To Fear, by Jackie French Koller
Potato: A Tale from the Great Depression, by Kate Lied
Rocks in His Head, by Carol Otis Hurst
Roses’s Journal: The Story of a Girl in the Great Depression, by Marissa Moss
Roll of Thunder, Hear My Cry, by Mildred D. Taylor
Rudy Rides the Rails, by Dandi Daley Mackall
Sky Boys, by Deborah Hopkinson
The Storyteller’s Candle, by Lucia Gonzalez
The Carpenter’s Gift, by David Rubel
The Cave, by Kathleen Karr
The Coming Home Cafe, by Gayle Pearson
The Dust Bowl, by David Booth
The Gardener, by Sarah Stewart
The Journal of C.J. Jackson: A Dust Bowl Migrant, by William Durbin
The Thanksgiving Visitor, by Truman Capote
The Truth About Sparrows, by Marian Hale
Turtle in Paradise, by Jennifer Holm
What You Know First, by Patrica McLachlan

Air Raid – Pearl Harbor, by Theodore Taylor
Alex, Who Won His War, by Chester Aaron
Aloha Means Come Back: The Story of a World War II Girl, by Thomas Hoobler
Baseball Saved Us, by Ken Mochizuki
Coming On Home Soon, by Jacqueline Woodson
Early Sunday Morning, by Barry Deneberg
Heroes, by Ken Mochizuki
Lily’s Crossing, by Patricia Reilly Giff
My Friend the Enemy, by J.B. Cheaney
My Daddy Was a Soldier, by Deborah Ray
Meet Molly: An American Girl, by Valerie Tripp
Nim and the War Effort, by Milly Lee
One Splendid Tree, by Marilyn Helmer
Say You Are My Sister, by Laurel Brady
Summer of my German Soldier, by Bette Greene
Taking Wing, by Nancy Graff
The Art of Keeping Cool, by Janet Taylor Lisle
The Bracelet, by Yoshiko Uchida
The Farm Summer 1942, by Donald Hall
The Morning Glory War, by Judy Glassman
Under the Blood Red Sun, by Graham Salisbury
Under the Shadow of Wings, by Sara Banks
War Boy: A Wartime Childhood, by Michael Foreman
Willow Run, by Patrica Reilly Giff

A Sweet Smell of Roses, by Angela Johnson
Freedom on the Menu, by Carole Boston Weatherford
Freedom Summer, by Deborah Wiles
Goin’ Someplace Special, by Patricia McKissack
If a Bus Could Talk: The Story of Rosa Parks, by Faith Finggold
Martin’s Big Words, by Doreen Rappaport
My Brother Martin: A Sister Remembers Growing Up with the Rev. Dr. Martin Luther King Jr., by Christine King Farris

One Crazy Summer, by Rita Williams-Garcia
Separate is Never Equal: Sylvia Mendez and Her Family’s Fight for Desegregation, by Ducan Tonatiah
The Bus Ride, by William Miller
The Other Side, by Jacqueline Woodson
These Hands, by Margaret Mason
The Story of Ruby Bridges, by Robert Coles
The Education of Mary 1832, by Ann Rinaldi
Vergie Goes to School With Us Boys, by Elizabeth Howard
We March, by Shane Evans
White Water, by Michael Bandy
White Socks Only, by Evelyn Coleman