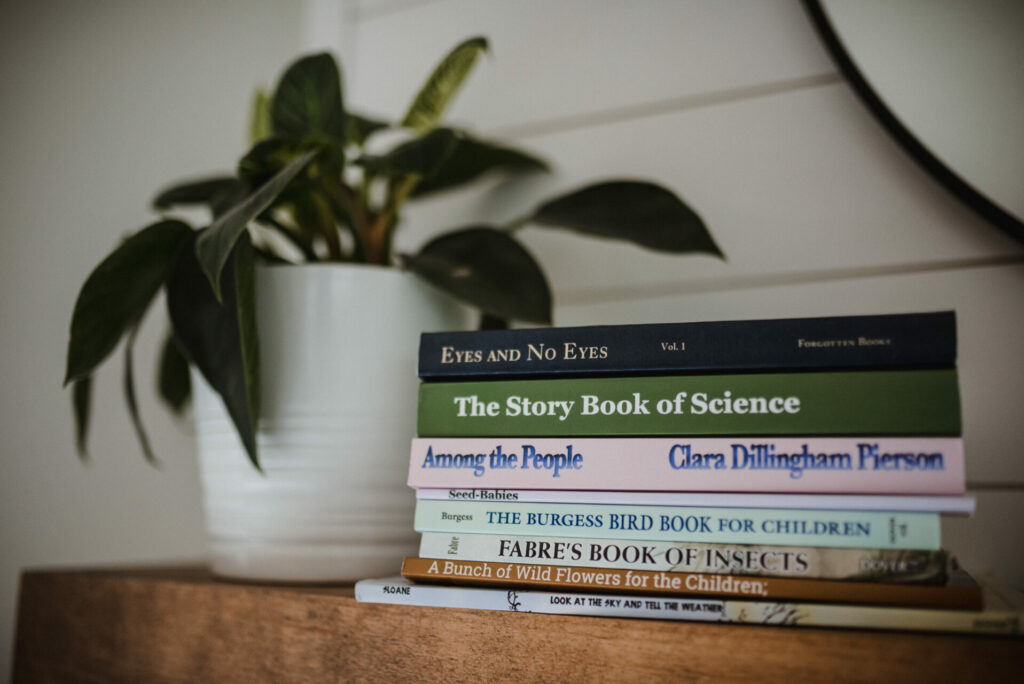 What is Nature Lore?

Nature lore is literature written by a naturalist and is designed to pique interest in the outdoors. Quality nature lore is often vintage. Nature lore should be read at a slow pace. Charlotte Mason recommends one 10 minute nature lore lesson per week, reading only 4-5 pages per lesson. Some books are read over the course of many years so they can be fully absorbed.

For more nature lore suggestions, look up authors listed below for their other titles. There are many more! Any books listed in elementary are valuable for older students as well.

A Bunch of Wild Flowers for the Children, by Ida Prentice Whitcomb
African Critters, by Robert Haas
Along the Seashore, by Margaret Waring Buck
All About the Flowering World, by Ferdinand Lane
Among the People, by Clara Dillingham
A Pair of Wings, by Marilyn Singer
Bird Watchers and Bird Feeders, by Glenn Orlando Blough
Butterflies, by Dorothy Childs Hogner
Dwellers of the Marsh Realm, by Archie P McKishnie
Egg to Chick, by Millicent Selsam
Exploring Nature with Your Child, by Dorothy Shuttlesworth
Eyes and No Eyes, by Arabella Buckley
Here Come the Lions, by Alice Goudey
How Kittens Grow, by Millicent Selsam
North: The Amazing Story of Arctic Migration, by Nick Dowson
Oceans, by Seymour Simon
Pagoo, by Holling C Holling
Rocks, Gems and Minerals, by Herbert Spencer Zim
Shag: Last of the Plains Buffalo, by Robert McClung
Snowflake Bentley, by Jacqueline Briggs Martin
Snowflakes in Photographs, by W. A. Bentley
Squirrels and Other Fur-Bearers, by John Burroughs
Ten Common Trees, by Susan Stokes
The Burgess Bird Book for Children, by Thornton Burgess
The Burgess Animal Book for Children, by Thornton Burgess
The Burgess Seashore Book for Children, by Thornton Burgess
The Thirteen Moons, by Jean Craighead George
Wild Folk at the Seashore, by Carroll Lane Fenton

All Creatures Great and Small, by James Herriot
A Naturalist Buys An Old Farm, by Edwin Way Teale
Animal Homes, by George F. Mason
Animal Stories, by James Herriot
A Year in the Maine Woods, by Bernd Heinrich
Bats, by Alice Hopf
Deep Woods, by John Burroughs
Desert Neighbors, by Edith M Patch
Field, Forest, and Farm, by Jean-Henri Fabre
Freckles, by Gene Stratton-Porter
Insect Adventures, by Jean-Henri Fabre
Journey into Summer, by Edwin Way Teale
Land of Little Rain, by Mary Austin
Life and Her Children, by Arabella Buckley
Nearer Nature, by Jim Arnosky
Secrets of the Woods, by William J. Long
State Flowers and Birds, by Olive L. Earle
The Amateur Naturalist, by Gerald Durrell
The Lay of the Land, by Dallas Lore Sharp
The Keeper of The Bees, by Gene Stratton-Porter
The Secret of Everyday Things, by Jean Henri Fabre
The Storybook of Science, by Jean Henri Fabre
The Wilderness World of John Muir, edited by Edwin Way Teale
The Wildlife of South America, by Dorothy Shuttlesworth
The World’s Great Lakes, by Ferdinand Lane
Trees That Every Child Should Know, by Julia Ellen Rogers
Wild Life of Orchard and Field, by Ernest Ingersoll